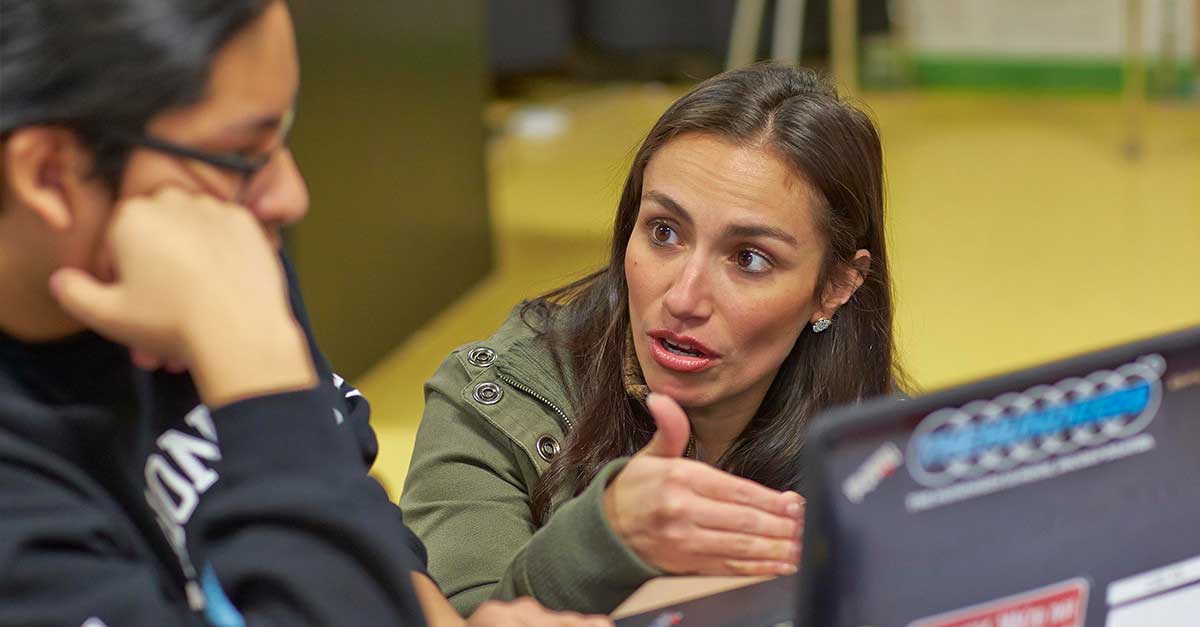 Urban school districts across the nation face a continuing shortage of qualified new teachers willing and able to work in America’s most challenging classroom environments.

This isn’t just an issue for specific districts, cities, or states.

The problems associated with underperforming, poorly funded, and understaffed urban schools affect all of us on many fronts, from economic issues to political realities, from quality-of-life questions to the promise of equal opportunity for everyone.

A specific marker tells the story: the rate of students dropping out of high school before graduation, and the problems that result.

The Real Costs of Dropping Out

A relatively small number of urban high schools produces half the total dropouts in America each year – even though these institutions account for only 20 percent of the total public high school population.

Known as “dropout factories,” these schools are foundational to a national problem. Each high school dropout costs the U.S. roughly $260,000 in unrealized wages, taxes, and worker productivity, according to Jason Amos of the Alliance for Excellent Education. This figure doesn’t include other costs associated with this sector of the population:

How significant are these numbers? The Census Bureau estimates that of the 4.25 million ninth-graders who enrolled in high school in 2012, 935,000 (roughly 22 percent) will drop out before graduation in 2016. Although this is just one class, these numbers are generally consistent in terms of annual rates.

Underperforming high schools aren’t the sole cause of the dropout problem; they’re merely the most visible indicator. Studies indicate that third-grade students from lower-income families who aren’t reading at grade level by the end of the school year are six times less likely to graduate high school on schedule, compared to their level-appropriate fellow students.

In short, every grade level and every classroom is crucial to solving the larger social, economic, and cultural problems that result from the increased high school dropout rates of underperforming urban schools.

Even though the issue is national, urban schools bear the brunt of such chronic problems as underfunded budgets, poorly resourced classrooms, and a proportionally larger number of students from non-English-speaking and low-income households compared with their suburban counterparts.

“Poverty takes a huge toll on student learning in urban schools. That’s a picture of teaching that can be a lot harder to address if poverty is walking in the door every day, if there are shootings in the students’ neighborhoods, if safety is an issue, and if these children are going hungry every day,” said Joseph P. McDonald, professor of teaching and learning at NYU’s Steinhardt School of Culture, Education, and Human Development.

One way to improve the ability of urban schools to take on these issues is to keep their current teachers, and attract new teachers ready and willing to make student achievement their focus.

As a nation, though, we’ve spent the last few years engaged in partisan political debates that have denigrated teaching as a profession.

McDonald and other observers note that in recent years, clashes at the local, state, and national levels around unpopular federally driven programs such as Race to the Top and the Common Core State Standards’ intense focus on testing have unfairly made teachers the targets of criticism of these faltering programs and continuing poor student performance.

This lingering perception issue is just one factor that has made the education profession far less attractive to undergraduates who might have considered a teaching career – essentially, the new teacher pipeline.

An improving economy also means college students are opting for more lucrative, more prestigious, and/or less volatile fields (such as technology or finance) in recent years, and data shows this shift toward these career fields is having a real effect in terms of the number of new candidates emerging from traditional teacher education programs.

The Specifics of Teacher Shortages

Nationally, the number of education-focused undergraduates dropped by nearly one-third from 2010 to 2014, according to the U.S. Department of Education, which produces the most accessible measure of traditional teacher education candidates. On a state-by-state basis, the numbers are even more significant. As one example, the California Commission on Teacher Credentialing indicates the number of candidates entering teacher education programs has dropped by nearly 60 percent since 2008.

Other states with significant shortages of teachers include North Carolina, New York, and Texas — the problem is especially severe in Dallas and Houston’s urban districts. Baltimore, Detroit, Las Vegas, and Philadelphia are experiencing significant teacher recruitment problems as well.

Newark, New Jersey, is again in dire need of new teachers, even though it was the beneficiary of a $100 million grant from Facebook founder Mark Zuckerberg’s Startup:Education foundation five years ago. That well-intended initiative achieved mixed educational outcomes, and critics note it has led to the closure of public schools and created distrust among parents, educators, administrators, and political leaders.

Even as the number of recent college graduates with teaching degrees drops, the improving economy means districts around the nation that cut teaching positions in recent years are now restoring these positions – but lack candidates.

Specific to urban schools, this renewed hiring competition by districts of all types further reduces the new teachers qualified in special needs, the sciences, and English-language-learner areas – the subjects and positions that most urban schools are challenged to fill.

All of these factors – college graduates moving into other career fields, continued state and district budget and resource issues, a lack of new teachers qualified in specific subject areas – create a series of serious, sustained challenges for urban districts nationwide.

This problem of attracting people into the teaching profession didn’t happen overnight, and it won’t be resolved quickly.

Any permanent, sustainable solution has to start with making the teaching profession more attractive to students entering college.

There are encouraging signs. Political momentum is moving back to a focus on community- and state-based consensus on educational priorities, and a dialogue centered on teachers in the classroom is the driving force behind real, sustained improvements.

“There are good things happening in that regard around the country. Not in every city, but in lots of them,” McDonald said. “There are systems in nearly every city now to delegate more authority to the schools themselves and less to the central office, which is a good thing.

“Everyone now agrees for various reasons that teachers are crucial for improving schools. Everyone agrees we must do something for all children. There’s never been this demand on teachers before.”

A Focus on Community Solutions

This movement toward a more positive image of teachers in the classroom, and especially high-need urban schools, is based on a more unified, community-based approach to what needs to be fixed, and how dedicated practitioners can make a difference.

“There are new programs in place and being developed that are very flexible and adaptive to the regional problems that may exist,” McDonald said. “We’re likely to go back to a healthier, community- and state-centric approach to improving our schools, with a better use of data and a reversion to more local dialogue moving forward.

“We also need to do what we can to activate people’s interests in serving their community. Lots of young people want to be actively and socially engaged, and we need to have dialogue around that. And we need to make sure they are well-equipped to start with new teacher education programs, working in good places with strong mentors and support systems to keep new teachers learning how to teach kids well.”

Underperforming – even failing – schools and classrooms produce students who in turn underperform, fail, and drop out. Sustainable solutions to this problem need to take place in the classroom, but in the context of a national conversation that promotes the teaching profession, commits to appropriate funding and additional resources for high-need schools and districts, and embraces new models for teacher education, subject specialization, and professional development.