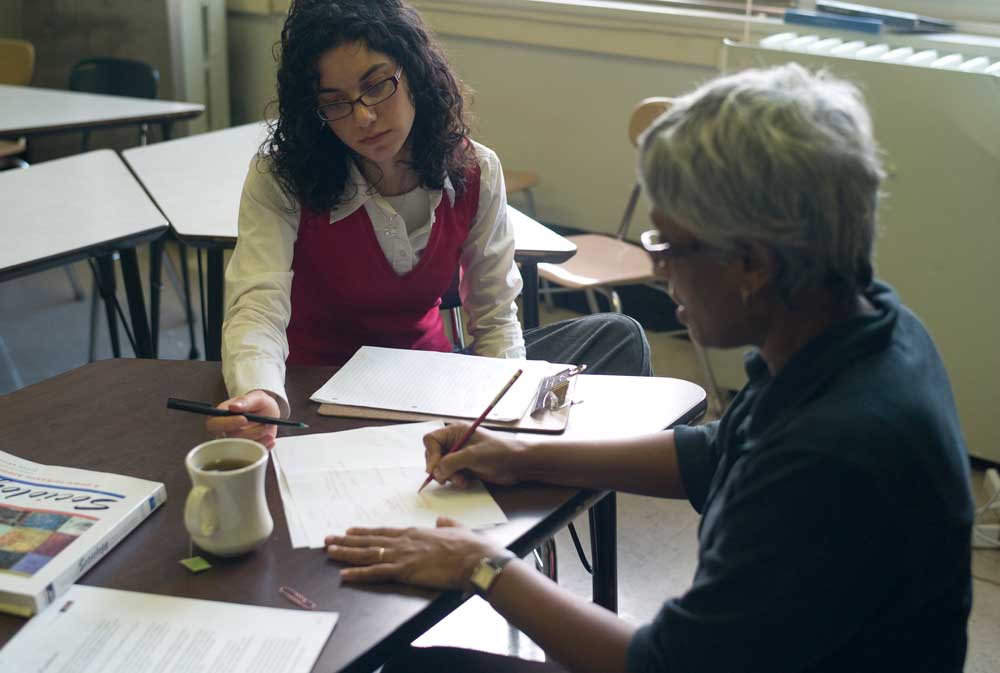 Teacher Education: From Revolution to Evolution

How are teachers taught? What kind of formal education do educators receive? In an era of increased standardization and regulation within many professions, how and when are classroom instructors licensed? Are certification standards created a generation ago adequate to address the relentless demand for better student performance? Are new teachers being adequately prepared for the needs of the typical public school classroom – which almost by definition is likely to be untypical because of demographic shifts, uncertain budgets, and rapidly evolving instructional technologies?

To address the basics of teacher education and preparation, let’s start just after the formation of the United States.

The ABCs of American Education

The history of America’s education system – more precisely, the nation’s public school systems – is a reflection of social, political, and cultural change.

During the early history of public education, beginning with the Colonial era and into the first decades of the 1800s, most teachers were male. They often had a basic education and another profession as farmer, merchant, or similar role, so arithmetic, reading and writing, and other skills-based tasks were well within their competencies. The usual standard for being trained and/or hired was as straightforward as passing a review by the local school board or town council, and possibly passing a basic competency examination.

For better-educated teachers, or those young men with more prescribed career prospects, the initial teaching job often was a steppingstone to a different profession such as law or the clergy. Prestigious, well-regarded religious and private schools offered teaching careers.

The foundational education reforms of the 1800s changed the landscape of public education dramatically because of the significant efforts of Horace Mann and like-minded reformers, including Henry Barnard, Catharine Beecher, and James Carter.

Mann trained as a lawyer in Massachusetts and served in the commonwealth’s legislature. He distinguished himself as a reformer convinced of America’s unique potential to serve the better interests of all its citizens, not just the privileged. He was the first secretary of the nation’s first board of education in 1837, and began a statewide campaign to establish Common Schools – essentially, secular public schools with state oversight, to ensure at least a minimum level of academic standards were in place.

A truly revolutionary aspect of this movement was the call for a new model of better trained, formally educated professional teachers, the model for the modern education profession. “Normal schools” became the way many of these aspiring teachers learned instructional methods and educational subject matter, which started America’s formal academic study of pedagogy — the art, science, and discipline of teaching and instruction.

The image of the little red schoolhouse has its roots in this period, and still serves as a powerful iconic image representing a time in our national history when – at least according to our cultural mythology – America was truly united through a shared educational experience open to all children.

“Indeed, despite Americans’ many differences, the little red schoolhouse may be the only icon that can bring them together,” writes Jonathan Zimmerman, a Steinhardt professor of history of education, in his 2014 book, Small Wonder: The Little Red Schoolhouse in History and Memory. “Regardless of the lumps it has taken of late, public education remains the major venue in which to discuss and deliberate the values Americans wish to transmit to their children. So if they want to make it more democratic – or more effective, or more rigorous, or more inclusive, or more anything – they will need a collective ideal. The little red schoolhouse provides it.”

As states nationwide formalized public education, formal pedagogy was a significant change within the profession: The previous emphasis for teachers had been on the fundamental skills of reading, writing, grammar and spelling, arithmetic, history, and geography. Most of this training took place through local schools, churches, or other community organizations.

The advancement of teaching as a profession also meant the establishment of professional standards, which were almost nonexistent in the 1800s. “Teacher certification in the 19th century was irregular and diverse. There was no single pattern, and there was no teaching profession as such. This changed, however, at the beginning of the 20th century,” writes Diane Ravitch, a research professor at Steinhardt, in her article, “A Brief History of Teacher Professionalism.”

The demand for teachers across the nation led to a unique division in how education programs took shape during the 20th century:

Following this path, in 1890, NYU established the first school of pedagogy in the country, elevating the preparation of teachers to that of lawyers and doctors. Today, that school is known as the Steinhardt School of Culture, Education, and Human Development.

While NYU Steinhardt’s early mission was to educate administrators and prepare graduates to serve as instructors in college-level teacher education programs, by the 1920s, the school was preparing teachers across all disciplines and all levels, and offered undergraduate, graduate, and doctoral degrees.

Other colleges and universities quickly followed this model, and the usual pathway for future primary/elementary grade teachers is an undergraduate major in education. Students who know they want to pursue secondary or higher teaching might focus on the specific discipline they want to teach, such as English, mathematics, history, science, or another field.

Depending on the institution, the program, and the state, education majors can receive training while they’re still an undergraduate at an accredited school of education, taking part in training that includes observing actual classroom instruction, student teaching, and other methods that can lead to initial teaching certification.

Candidates also can complete initial certification and licensure preparation after undergraduate graduation, or through specific teacher education programs, such as those recognized by the Council for the Accreditation of Educator Preparation.

Regardless of which path prospective teachers follow, many states require teacher candidates to pass specific standardized tests to certify basic or core knowledge of general subject matter, as well as pedagogy and instructional techniques and methodology. Most state agencies use the Praxis (Pre-Professional Skills Test) examination, according to the nonprofit Education Testing Services, which also administers the GRE, TOEFL, and other tests.

For teacher candidates who didn’t earn an undergraduate education degree – or for teachers who want to deepen their subject matter and pedagogy expertise – graduate programs are also teacher preparation pathways.

Many university-based programs offer either a master of arts (MA) or master of science (MS) in education, and these tend to be evolutions of the undergraduate education program model. Other programs include the master of arts in teaching (MAT) or master of education (MEd). While the public might see these programs as interchangeable, there are certain key differentiators:

The MAT: An Emerging Professional Pathway

Career-changers or recent graduates who don’t hold undergraduate education degrees may find the MAT a more approachable entry into the field. MAT programs help bridge the gap into teaching and certification/licensure because they’re usually structured as a one-year program leading into initial teaching licensure, or as flex programs offered part time on weekends or evenings to accommodate working adults.

Program structure aside, is there a meaningful, significant difference between the MAT and the more traditional education master’s programs? If so, what are the implications for the American educational system, given that individual states set so many standards and requirements?

The modern standards movement, which calls for a better-defined set of nationally applicable standards that guide what teachers should teach, and how student performance can be measured, among many other issues, has most recently been defined by such programs as the No Child Left Behind Act, the Common Core State Standards Initiative, and the 2015 Every Student Succeeds Act.

“At a time when our students are expected to meet high standards in English, mathematics, science, and history, there is a mismatch between teachers’ academic preparation and the increasingly rigorous demands of the classroom,” Ravitch states.

In other words, there might be too much emphasis on teaching how to teach, and not enough emphasis on real-world instruction that brings all students to where they need to be per grade level. For high-needs schools, especially urban public schools, the inability to attract and keep new teachers has heightened the issue of teacher preparation and candidate quality, an issue that’s been debated by parents, lawmakers, education leaders, and many others over the last two to three decades.

“Today’s teachers need to know and be able to do things their predecessors did not. They have to be prepared to educate all of their students to achieve the highest learning outcomes in history. This is a fundamentally different job than that of past generations of teachers,” Arthur Levine, president of the Woodrow Wilson National Fellowship Foundation, stated in his 2006 “Educating School Teachers” report.

In his findings based on a four-year research project, Levine claimed many schools of education were in a “pursuit of irrelevance” by not focusing on the need for higher student performance in core subjects – spurred by the reality of increased competition in the global marketplace – the nation’s changing demographics, and a host of other factors.

The response is toward more effective teacher education models that focus on real-world immersive training, a holistic approach to teacher development through mentorship, and significant emphasis on subject-matter mastery.

The new models might be where MAT programs have an advantage. Given their focus on hands-on teaching experience and advanced subject matter learning, institutions offering MAT programs may be able to quickly reconfigure their programs to meet this demand for accelerated student outcomes.

One promising alternative model is the teacher residency approach. NYU Steinhardt is again breaking new ground in teacher education and preparation by proposing an innovative new residency-based program that will enable candidates to earn a graduate degree through a combination of immersive on-site experiences in high-needs urban schools and online course work.

“Research shows that the strongest way to prepare effective teachers is through immersive experiences in schools, but too few teachers are trained this way,” said Dominic Brewer, Dean Emeritus of NYU Steinhardt.

“Our proposed program is the first significant attempt by a major research university to create a national model that departs from the traditional pathway of teacher education while leveraging state-of-the-art data analytics, working flexibly across states and districts, and embedding candidates in real-world classrooms,” he said.