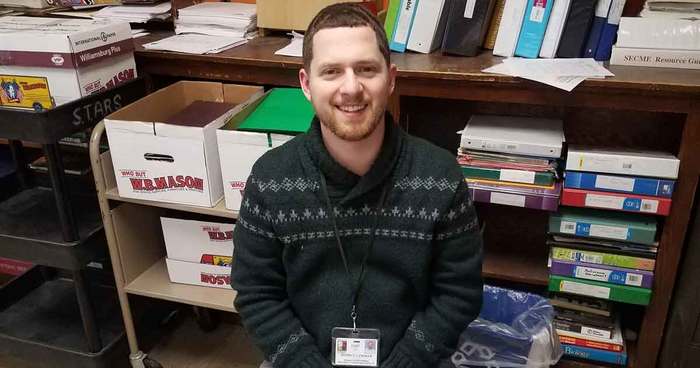 “I was working the graveyard shift, so that was one of the biggest adjustments when I decided to pursue teaching.” Justin Canfield explains what it’s been like to get used to a career – and a schedule – where basically everything is new. Justin started NYU Steinhardt’s Teacher Residency this past fall at Grant Middle School in the Syracuse City School District. What’s more, on the first day of school, Justin also became a new dad. In both roles, he knows hard work will pay off and a positive attitude will be his biggest asset.

For some of us, we know what we want to do from a very young age; for others, we try an array of professions until we find one that sticks. Justin is somewhere in between. He left high school with his heart set on becoming a teacher. As he studied biology in college, he developed an interest in environmental sciences.

In his last year of college, Justin started to explore positions within the New York Department of Environmental Conservation. He took the entry examination, and waited to hear back. Four years later, while he was working as a machinist, he finally received a call that a position opened up; but he’d have to spend a year in New York City. With a newly pregnant wife and the rest of his family in upstate New York, this simply wasn’t an option.

One fateful day, his mom, who is now retired from the Syracuse City School District, received an email about a new teacher residency program and master’s degree from NYU. But Justin didn’t have to travel to New York City to attend the program. He could stay close to home while pursuing his long-held dream of becoming a teacher. Justin applied, got accepted, and is on track to teach eighth-grade earth science next year.

Right now, Justin’s focused on soaking in every bit of knowledge that he can. “It’s clear our goals are to absorb material in one class at a time, build strong relationships, and get increasingly comfortable with eventually becoming the lead teacher.” Justin attributes a lot of his growth to Mr. Robert Woolery, his teacher mentor, an educator who has been teaching for 24 years, 13 of those with the Syracuse District. He was paired with Mr. Woolery at the start of the school year to get feedback, support, and coaching in preparation for when Justin leads a class of his own.

This gradual release of responsibility is by design. Teacher residents have the support of NYU faculty – and their teacher mentors – while being immersed in a classroom setting. “In February, it was my turn to build and instruct an entire lesson on photosynthesis. At the same time, in our course work, we were learning how to create effective lesson plans. The hands-on practice allows you to make sure you know what you’re doing.”

He acknowledges that he’ll never stop learning, and that next year is just the beginning; the same goes for fatherhood. “But, I’m ready,” he says confidently.

Sometimes you just know that a career is for you, sometimes you have a hunch, and sometimes you need to try a variety of experiences to figure out your place in the world. If you’re curious about teaching, thinking about a purpose-driven job, or wondering if it’s time for a big career change, join one of our information sessions. Through the NYU Steinhardt Teacher Residency, you’ll gain a master’s degree from one of the world’s leading research universities while launching a high-impact career.