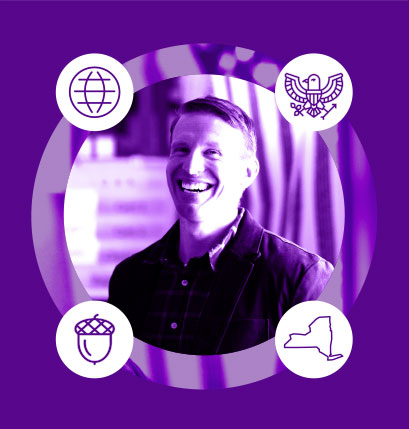 From Special Forces to the Classroom: How One Veteran Leverages Military Experience in Education

“When I talk to my veteran friends, I say ‘I’m coaching, teaching, and mentoring’ just like I was as a Green Beret. . . The similarities between the military are a lot. I never thought it’d be this close.”

Zac Lois is a Grade 8 social studies teacher at H.W. Smith in the Syracuse City School District. He graduated from the NYU Teacher Residency’s yearlong immersive educator preparation in 2018 after a successful career as a member of the US Army Special Forces, commonly known as the Green Berets.

“As a Green Beret, our primary goal is to teach. We help indigenous populations to resist a government or an oppressor. Or on the other hand, we support foreign internal offense.”

When sharing his pathway to teaching, Zac reflected on the countless ways in which he was a teacher and a student during this experience. He explained that so much of his role in the military involved listening, understanding, and forming relationships with people to provide tools to help them in their lives. As a history aficionado, he also relished learning about cultures while serving.

Shortly after transitioning from the Green Berets, Zac was not immediately sure he wanted to teach. Yet the idea kept resurfacing from time to time.

“I went to the business world. I had two jobs in two years, and it was not fulfilling. My wife and I moved to New York and put down roots in Syracuse, and it was then that I realized I couldn’t get rid of this nagging itch to teach history.”

Zac recalled asking the advice of a former company commander who left the Army to go into education. “I reached out to him, and he said do it!” In 2017, Zac discovered the Teacher Residency and began his teaching career.

Cultural understanding was essential to Zac’s success in the military. He noted the importance of accepting foreign cultures but also underscored the ways in which the military taught him of America’s vast subcultures. The Teacher Residency experience, combined with his time in the military, created a valuable belief system that guides his teaching today: “I am a big proponent of students and young adults getting these experiences through the various national service organizations – to get to know the other people in your own country.”

“The military has the same demographic components as the US population – all in one spot. For example we had a whole bunch of people from the Bronx, Queens, and Arkansas. You’re living together, eating together, and building relationships with people you may not have otherwise ever met.”

“Being focused on [cultural understanding] was so useful. These different perspectives are so important. I see a lot of teachers coming from standard teaching programs who have not had culturally responsive teacher training.”

Syracuse City School District has a high refugee and immigrant population. Students in Zac’s school come from 80 countries and speak 24 languages. He continues to find ways to connect the cultural aspects of his military experience to teaching.

As one way to explore cultures and relate to the students, Zac often introduces food from all over the world. During his first year in the Teacher Residency, he brought in flatbread and began a discussion about foods from the Middle East. (He had been stationed in Iraq and was particularly familiar with the foods from this region.) Zac discovered during a conversation that a student from Iraq grew up two blocks from where Zac lived.

“We ate at the same falafel stand. It was such a small world, and this bonding over food and talking about our similar experiences – it meant so much. To think, here he is 10,000 miles away from where he grew up, and someone understands him.”

Similar to how Zac remembers building expertise and knowledge in the military, he applauds the “learn by doing” model exemplified in the Teacher Residency.

“I couldn’t imagine going through any other teaching program. People learn by doing and emulating. With the assistance of a teacher mentor, you get to see what ‘right’ looks like the entire time.”

To learn by doing also means constantly evolving and learning from those around you. Zac relates this concept to his military service when he worked hard to emulate and learn from his Special Forces teammates, and vice versa, because the strength of the team depended on this cohesion.

“Teaching is an art, and you want to get better at your craft. Being on a team is really helpful. I look at my teammates, and they are always working hard and always motivating me to keep at it.”

As Zac approaches his third year of teaching, he recognizes he must continue to ask questions, find resources, and not be shy about requesting help. He acknowledges that there’s never a point at which you just arrive at being an excellent teacher; there’s always more work you can do to improve.

Building a pipeline from veteran to educator

In addition to continually improving his teaching, Zac actively works on the veteran-to-educator pipeline. He received a grant from NYU Steinhardt to conduct research and issue a 300-person survey during the summer of 2019, with the help of Diana Turk, director of teacher education, vice chair of the Department of Teaching and Learning at NYU Steinhardt, and co-director of the NYU Teacher Residency.

He created a program called Operation Socrates, modeled after the Teacher Residency. The program works with individuals coming off duty or veterans changing careers to embed them in schools across the country alongside mentor teachers. Universities will deliver the Operation Socrates programming.

“Through the research, we found such a need for men of color in education. When you’re a middle school kid, you want your teacher to look like you, and we don’t do that for enough kids. My goal with Operation Socrates is that we can get more diverse teachers so students can find someone they can confide in.”

Now more than ever, Zac is dedicated to sharing lessons on cultural understanding, encouraging students, and bringing more qualified and dedicated veterans to the classroom.

“I often think of the proverb: ‘A society grows great when old men plant trees whose shade they know they shall never sit in.’ What excites me the most is the continued opportunity to inspire students with history, help them find their purpose, and the ripple effect that will hopefully occur with all the great things they go on to do for the community and country long after I’m gone.”