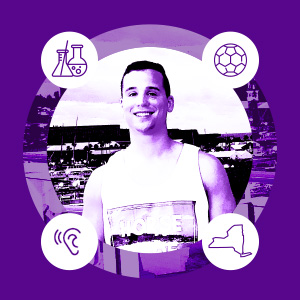 “I want to make a difference; I want to leave a footprint when I die.” Cameron Schiavone found himself questioning why he pursued a career in construction when he started interviewing for substitute teaching roles at schools in his home city of Syracuse.

Cameron graduated from the NYU Teacher Residency in 2020 after specializing in science and immersing himself in a yearlong residency at Brighton Academy in the Syracuse City School District.

“As soon as I started substitute teaching a bit, I realized this is what I wanted to do.” After those initial months subbing, a colleague shared information about the Teacher Residency, and Cameron’s mind was made up. He did not spend much time looking into other programs; with substitute teaching, Cameron had started to witness the importance of learning directly in the classroom.

“You would receive hands-on experience every day [through the Teacher Residency], for a year. I knew that in-person learning and working alongside mentor teachers and administrators would show me what it’s like to be a teacher.”

Grasping the importance of relationships and community

Cameron grew up in Syracuse, and as he started to get older in his hometown he began to understand the various ways that one could connect to their own community. He saw how ignorance developed from a lack of exposure and knowledge of people outside your own small community. “There’s a powerful moment in your life when you recognize that not everyone had the same experience growing up, and that all people have so much to offer.”

Cameron recalled playing soccer in a citywide league where he made deep friendships with people whose backgrounds differed from his own. “A few teammates were refugees from Africa. One day, my dad and I realized how far across the city they would travel just to play soccer, so my dad offered to drive them. My dad always set a good example for me.” This drive home became a ritual and, through the years, the teammates developed great friendships. “It doesn’t matter where you’re from, you can build relationships with anybody; you can help anybody.” That experience is part of the reason why Cameron is a teacher and why he also hopes to become a soccer coach for the Syracuse City School District.

He honed his focus on community and relationships through the Teacher Residency. Throughout the year, he began to pay more attention to the intricacies of each and every student.

“The Teacher Residency teaches you how to better manage your classroom, but not in a typical way.” Cameron learned the importance of recognizing that every classroom is different, and that every student brings their own unique experiences, habits, and interests to school. In his current practice as a teacher, he consciously attempts varying strategies to get to know students and their families, which in turn gives him the ability to know when a student may be struggling, in school or in life.

Cameron feels strongly that making school equitable means making learning engaging and meaningful for students – for all students. “Unless you can do that – if you’re not teaching them and not managing your classroom effectively – kids aren’t getting an equal access to education.”

Becoming an advocate for all children

At this early stage in his career, Cameron knows it’s essential that he continues to learn from his colleagues, asks questions, and evolves his practice. Despite feeling new to the profession, he is passionate about being an advocate for all children.

“I want to empower kids and show them that they matter. They can make such a big difference in this world; they can go to college and become lawyers, doctors, nurses, dentists, and teachers. They can accomplish anything they put their minds to!”

He describes a moment over the last year when he noticed a student struggling. “I would sit with him, and he would try to complete his lessons, and he needed me to rephrase things.” Cameron identified that the student needed some extra support and differentiated instruction. “It was not for lack of trying – it was because he couldn’t read that well.”

Cameron credits his mentor teacher, Mr. Adam Curtis, for his newfound understanding of how to listen, pay attention to, and approach students. “The immersion will help you a huge amount. There were so many things that I was exposed to that I never would have known how to handle myself.”

The lessons are plentiful from the Teacher Residency, he says, and he also knows his drive to impact the lives of our next generation will keep him going. “If you want to push yourself and make a difference, you will succeed.”