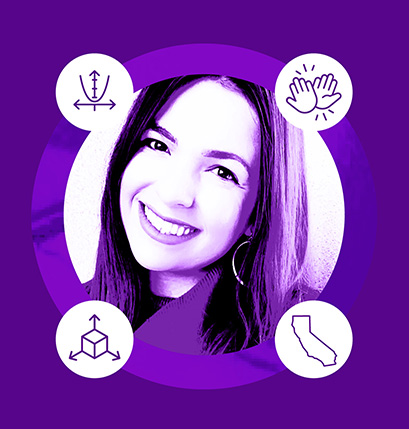 “I can’t pinpoint an exact moment [when I realized I wanted to become a teacher]. It’s like asking a singer when they first began singing; they will tell you that they began as soon as they could talk! That’s how I feel about teaching.”

Ashley Perez graduated from the NYU Teacher Residency in 2019 and fulfilled what she described as an innate desire to help others through teaching. “I have always said that being a teacher is not only what I do, but who I am.”

Rewriting the narrative on math

Like many students, Ashley changed her major during college. “I knew that I loved math. So what did I initially major in? Accounting! I quickly realized that I would not feel fulfilled as an accountant.”

She went on to major in math and kept ruminating on the career that inspired her: teaching.

Immediately after graduating college, Ashley pursued a master of arts in teaching. “The Teacher Residency was perfect. The fact that it was such a hands-on program and not just a couple of months in the classroom made a difference for me.”

While a teacher resident, Ashley’s content area was math. She examined how it came naturally to her and how she self-identified with being “good at math.” Just as this positive identity served as motivation throughout her schooling, she started to see how detrimental the opposite identity could be for students.

“I stuck with my gut and began studying to become a math teacher. Math is one of the most difficult subjects for students, which presented me with an exciting challenge! I want to be able to rewrite the narrative of being ‘good at math’ or ‘bad at math’ so that students understand that mistakes and productive struggle are an important and necessary part of learning something new.”

“I try to redefine this idea that math is not for everyone. A lot of students think if they fail at something, that’s it, and they don’t give themselves a second chance.”

The Teacher Residency offered Ashley the opportunity to build relationships with students immediately.

“It’s different than if you’re just placed in a classroom for a couple weeks or months. From the get-go in this program, we were able to build relationships with students. I actually grew up in Corona Norco, and my residency took place at my former high school. I was familiar with the school, but I still needed this time to truly get to know my students.”

Ashley described the gradual release model, where teacher residents are incrementally given new and more responsibility in the classroom as they gain skills. This aspect of the program led to deeper connections and more respect from her students.

“Getting to know both who [students] are as people and who they are as learners builds a rapport that will set you up for success once you begin teaching full-time in the second semester. My mentor teacher, Kevin Enger, was big on standing outside of his door every single day to greet students with a high five. I interviewed him about this for an assignment, and he claimed that it cuts down on tardiness, but more importantly, that it sets the tone for the class and shows students that he cares about them.”

Math comes second, Ashley explained. She first forms relationships with students, which is the foundation of her commitment to positive educational experiences for all students. “ She works to understand students on a personal level and what outside factors may affect their schoolwork. We don’t even have to talk about math.”

“I am reasonable with assignments; I will accept late work; I will give an opportunity to retake. It’s important to me. With retakes it may seem small, but it’s part of my commitment to give students a second chance. Too many kids end up failing because they were never given another chance. And that chance is so important to being equitable.”

Ashley acknowledged that not every student may like her, despite her best effort to build connections. “That’s fine. But I will still show them that I will do my best to support them.”

“One of the biggest advantages of this program was the support system, and also one of the biggest surprises. During my undergrad degree, I commuted. The relationships I made through my online program were so much stronger and more meaningful than in college.”

Ashley’s content mentor, Anne Burgunder, clinical assistant professor of math education at NYU Steinhardt, took Ashley’s love of the subject and helped her develop a unique pedagogy and technique to teach it. “Anne was instrumental. She emphasized that math is not just about procedural fluency. It’s about problem solving and conceptual understanding, too. She was great at breaking things down so I could help my students understand math more critically.”

Ashley also deeply appreciated the support of Christine Gentry, residency director and visiting assistant professor at NYU Steinhardt. “Having Christine on campus every week to observe but also to just check in on me was so important. She would simply say, ‘How are you doing, personally?’ She sent us surveys that asked what she should keep doing, and what she should stop. I now model this in my classroom. It’s a mental health check with my students.”

The individual who Ashley conjures up nearly daily in her teaching practice is Kevin Enger, her mentor teacher who passed away from cancer in March 2020. “Enger modeled what to do in nearly every scenario. He’s no longer with us, but he made such a huge impact – on his students and on me. He was there in moments when I struggled to get through the day. His philosophy was “Smile every day, be yourself, and bring fun to the classroom, especially with math.”

“My connection with [Enger] stays with me. He wasn’t just my mentor teacher, he became an important figure in my life. And that came naturally with this program.”