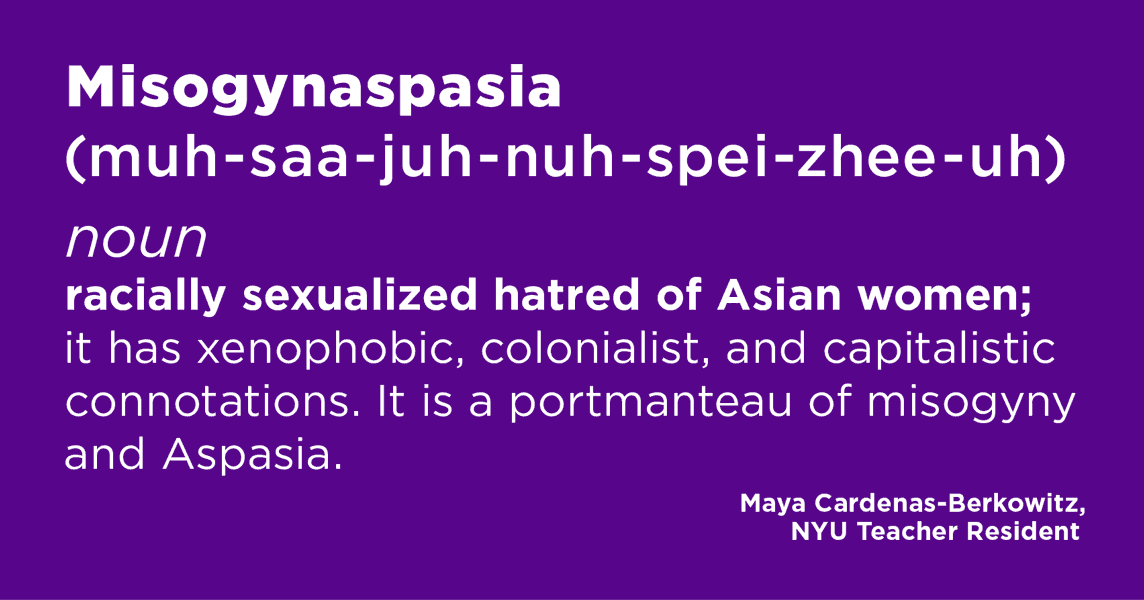 Teaching and Learning Trends
May 6, 2021

The NYU Teacher Residency’s commitment to anti-racism, inclusion, and belonging has been one of the program’s core principles since we launched in 2016. One way we demonstrate this commitment is through the voices, perspectives, readings, and reflections we share in this blog. With the unprecedented challenges of the last 12 months, our belief that learning means reflecting has only deepened.

It’s more than a sentiment; this responsibility is fostered throughout the Teacher Residency in the curriculum, the culture of learning and understanding, and our residents’ experiences in their school communities. Residents are encouraged to explore, deepen, and share their commitment to anti-racism, inclusion, and belonging as individuals on the frontlines of education in America. In turn, faculty listen and provide the safe space for residents to reflect.

The following is a personal essay from Maya Cardenas-Berkowitz, a current resident in San Francisco.

I was born in San Francisco, but people always ask me where I am from. When I tell them I was born in the Mission, they ask me where my mother is from – not satisfied by my answer. And when I proudly tell them I am a second-generation San Franciscan, they get a little upset usually. I ask them where they are from, Cleveland? I am “foreign” even in my hometown despite never having visited my family’s homelands of Thailand and Laos (I hope to change that very soon when the pandemic is over). But it certainly stings having the color of my skin and the shape of my eyes determine that I am not “American” enough to be accepted.

When I read the news of the Atlanta spa shootings, I was completely heartbroken. That day, one of my biggest fears came true – an entitled, misogynistic white supremacist murdered six Asian women based on stereotypes associated with being an Asian woman. It’s been an incredibly painful experience witnessing something so close to home, knowing very well that it could have been me or my loved ones. Seeing myself, my cousins, my aunts, my mother, my grandmothers, my friends, my neighbors in the victims. I wanted so badly to announce to the world that Asian women were not made to fulfill the distorted sexual fantasies of white men. We are humans, not dolls. Sex work is work, period. Fetishizing us is not a “compliment” even if they are “positive” because they create an imbalance of power in which men, primarily white men, feel they can dominate Asian women. The vast majority of Asian women have experienced racialized or ethnic sexual microaggressions. Hypersexualizing and objectifying Asian women in the media and entertainment, especially the pervasive violent depictions in the pornography industry, has created deadly consequences. I teach eighth-grade social studies and am the only Asian woman on our team, so I was a little more shaken and unsure how to address this event with our students. We told them the facts, but I wanted to say more.

I attended a workshop called Theatre of the Oppressed with Raven Stubbs through the Serve the Moment Fellowship, a 10-week Jewish service program. We went over the Matrix of Domination by Patricia Hill Collins, and Raven shared the word: misogynoir. If you haven’t heard this word, I hope you share it, too. Misogynoir is a term coined by queer Black feminist Dr. Moya Bailey to address misogyny specifically against Black women. There is both power and pain in this word.

I found myself wondering if there was a word that specifically addressed misogyny against Asian women. I spent several days trying to find this word on the internet, but I wasn’t able to. I wasn’t even able to find a word that specifically addressed anti-Asian hate in the way that anti-Seminism conveys hatred towards Jews and Sinophobia expresses anti-Chinese sentiment. In almost every article I’ve read about recent Asian hate crimes, the word used is xenophobia: hatred of foreigners. There isn’t a word to my knowledge that already exists and is quite as fitting to describe the intersectionality of race and gender in anti-Asian misogyny. And I felt very strongly that there needs to be a word to articulate the collective experience of Asian women especially given the surge in violence towards us. We need a word that is the inverse to this kind of racialized heteropatriarchy.

The word Asia comes from Greek origins, derived from the word “asu,” which means East. Paired with the Latin word “oriens,” (root of the antiquated term, oriental), which means “rising” and refers to the sun. Asia became known as the land of the rising sun because the sun rises from the East. The name Asia has Biblical significance as it was the name of Moses’s adopted mother and wife of the Pharaoh as well as a variation of Aisha, the name of Muhammed’s favorite wife and one of the four “perfect women.” Asia is also a shortened version of Aspasia. Aspasia of Miletus (c. 464 bce-420 bce) was a highly regarded rhetorician and philosopher in Ancient Greece who was perhaps the most influential woman of her time. Her salon became the intellectual center in Athens, attracting the most prominent writers and thinkers, including the philosopher Socrates. Aspasia was known for her beauty and intelligence. However, she did not have citizenship in the polis of Athens, which meant she was required to pay a tax to live there and could not marry an Athenian. And she was depicted as a brothel keeper and prostitute as well as a mistress to Athenian statesman Pericle. It is notable that Aspasia was a brilliant woman whose accomplishments were overshadowed by misogynistic moral judgements made of her regarding her sexuality in her time.

So the word that came to my mind at least as a placeholder until we can find even better language is: Misogynaspasia (muh-saa-juh-nuh-spei-zhee-uh). Misogynaspasia is the racially sexualized hatred of Asian women; it has xenophobic, colonialist, and capitalistic connotations. It is a portmanteau of misogyny and Aspasia.

I will be teaching a unit on The Women’s Experience in the United States this month, and I am making sure that women of color are well-represented in the narrative. During this difficult time it is so important to build solidarity with one another and elevate the voices of BIWOC. Black women especially deserve credit for the advancement of women’s rights for all women and contemporary social thought. Kimberlé Crenshaw gave us intersectionality. Alice Walker gave us womanism. Audre Lorde gave us self-care. Alicia Garza, Patrisse Cullors, and Opal Tometi gave us the Black Lives Matter Movement. Tarana Burke gave us #MeToo. Amanda Gorman gave us “The Hill We Climb.” And Maya Angelou, Toni Morrison, and Octavia Butler were able to share stories that resonate with the human experience. My hope is that creating this word will help foster necessary, difficult conversations and empower my fellow Asian women.